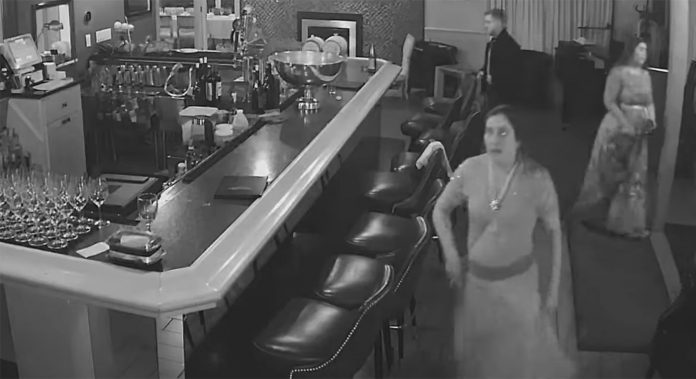 Woman Who Swiped $4K Bottle of Cognac From San Jose Restaurant ID’d as Mother of 6, Owner Not Pressing Charges

The suspect has been identified in that brazen and ill-conceived theft of an expensive bottle of Remy Martin Louis XIII Cognac from a steakhouse on Mt. Hamilton last week, and she’s very, very sorry.

As we surmised yesterday, it was probably just something done on a drunken dare after a long and boozy steak dinner. But the lady seen on surveillance footage stealing the $4,000 bottle of Cognac has apparently been identified by the sheriff’s office, and the restaurant owner has decided not to press charges after all.

The incident happened on March 12 at the Mt. Hamilton GrandView steakhouse, a restaurant and event venue in the hills just east of San Jose. As two men appeared to stand watch, a woman was seen on the tape going behind the bar and grabbing the pricy bottle, and then walking out with it along with their dining companions.

Her name won’t be publicized for public shaming, but as NBC Bay Area reports, the release of the footage to the media seemed to quickly do the trick on Monday. The Santa Clara County Sheriff’s now has the woman’s name and information, and she’s apparently a mother of six (!). It’s not clear if she immediately came forward when the footage was released, or she was contacted by the sheriff’s office, but the owner of GrandView says she “apologized profusely” and returned the bottle, or whatever was left of it.

“With all the bad things happening around the world, from COVID to Ukraine, I decided to give her a second chance and not press charges,” the unnamed restaurant owner said in a statement to NBC Bay Area. “She’s a mother of six who says she’s very sorry.”

Hey if I had six kids I might be known to do something crazy or unhinged every so often. Still, don’t try this yourselves! Six kids and a few cocktails is no excuse for grand theft!

2/2
“With all the bad things happening around the world. From COVID to Ukraine, I decided to give her a second chance and not press charges. She’s a mother of 6 who says she’s very sorry.”

But the family is not welcomed in the restaurant any more. pic.twitter.com/7ahqnX6g2L