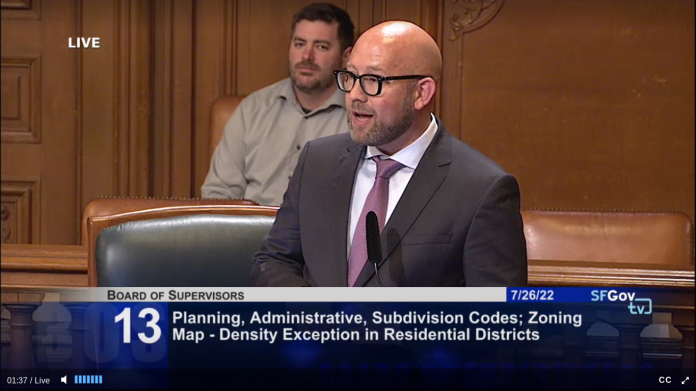 Despite Impassioned Speech By Mandelman, Board Upholds Breed’s Veto of Fourplex Legislation — By Just One Vote

Supervisor Rafael Mandelman gave a barnburner of a speech Tuesday criticizing the mayor’s veto and YIMBY darling law SB 9, and almost overrode the mayor’s veto of his fourplex legislation, but still fell one vote short.

When San Francisco Mayor London Breed slammed an unexpected veto on Supervisor Rafael Mandelman’s legislation allowing single-family homes to upzone to fourplexes last Thursday, she declared that the measure she initially supported “as amended, will set back housing production.”

The amendments she referred to were those that still allowed for neighborhood appeals on proposals to add units, and a rule that an owner had to own the property for at least five years (or inherit it from a family member who owned it more than five years) before adding units.

But Mandelman, by city rule, got another chance Tuesday afternoon to revive his baby that was thrown out with the bathwater. Any vetoed legislation gets a second chance before the supervisors, but needs a two-thirds supermajority to override the veto. And Mandelman gave a memorable stemwinder speech in his legislation’s defense that was surprisingly critical of Breed and her veto.

“The mayor’s own Planning Department and her own Planning Commissioners recommended the very provision of my fourplex legislation to which the mayor seems to take the greatest expectation,” Mandelman fumed. “I am puzzled. I am dismayed.”

He also took a hammer to the new state law SB 9 California HOME Act, which expedites approvals of housing projects.

Mandelman’s speech was good enough to win over a board majority, but not a supermajority. The 7-4 vote in favor of Mandelman’s fourplex legislation fell short of the 8-3 vote required to override a mayoral veto, even though most supervisors objected to the mayor’s veto.

“The vast majority of the amendments we made were made without any objection from the mayor or her staff,” Supervisor Aaron Peskin complained. “It is the height of ludicrousy [sic] and hypocrisy when the Planning Department staff, who works for a Planning Director that was hand-selected by the mayor, makes a recommendation to this Board of Supervisors that we adopt, only to then be vetoed by the mayor. That is nuts.”

But Supervisor Ahsha Safai argued that the five-year rule was a bigger hurdle than most of the supes realize, and that traditional developers are needed need to fill that void.

Meanwhile, Supervisor Shamann Walton opposed the fourplex legislation because he felt  increased housing density “will continue to gentrify communities in District 10,” he said. “A good chunk of folks have been pushed out of my community due to just trying to go dense.”

Mandelman’s co-sponsor, Supervisor Myrna Melgar, feared this would all end up as yet more ballot measures.

“I do not want to be put in a position as a board where our only option, where we’re polarized on land use issues, is to go to the ballot,” she said. “That is expensive and can have lots of unintended consequences.”

Yet that is what will probably happen. Breed is planning a housing ballot measure for this November, and today the board considered another one from Peskin and Supervisor Connie Chan, which they voted to take up at another meeting.

Facebook
Twitter
Pinterest
WhatsApp
Previous articleMaybe We Won’t Be Getting a Dept. of Sanitation and Streets After All, With New Amendments Headed for Ballot
Next articleSFPD Mission Station Doubles Down on Seemingly Pointless Barricades, Wants Permanent New Ones