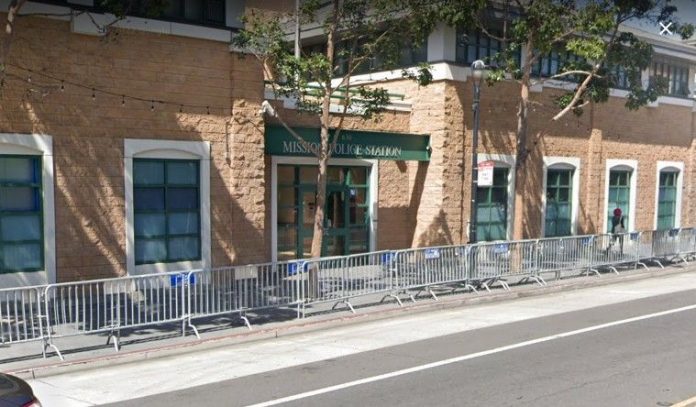 Those baffling barricades have been in front of the SFPD Mission Station for more than two years, and now we learn the department wants to erect permanent new barriers in front of the whole station.

Every time I walk down Valencia Street, I am always completely nonplussed by a set of metal barricades surrounding the SFPD Mission Station at Valencia and 17th Streets. They’ve been there for, Christ, I can’t even remember how long. Was there a parade or something, and someone forgot to put them back in storage? Can we blame this on some Public Works task backlog? It makes no sense!

Over two years ago, @SFPDMission put a metal barricade along Valencia and 17th Streets, negatively impacting our public space and merchant corridor.

Well, Community Spaces SF organizer Luke Bornheimer started asking questions about this, with screenshots of his communications SFPD seen above. The SF Standard looked into it and found that SFPD had kept them there by choice, and on top of that, want new, permanent barriers installed outside the station so that unsightly and unwelcoming barriers are forever a part of the Valencia Street landscape.

Close the sidewalk 🤷‍♂️ it's fine. Builds respect with the community. pic.twitter.com/EgvcsTFqba

As seen above, it turns out the barriers have been late May of 2020, when all of the George Floyd unrest was happening. Fair enough. Pot dispensaries had some pretty unwelcoming additions to their storefronts back then too. But anyone can tell you that things have calmed down considerably since the summer of 2020, and it’s kind of implausible to still be riding the George Floyd protest excuse now some 25 months after that series of events.

In an email to @SFPDMission’s Captain, I explained the barricade’s negative impacts and requested it be removed.

In response, the Captain said they asked for a more permanent barricade(?!) and blamed the City.

When I clarified my request, he responded with only, “Understood” 😔 pic.twitter.com/zb7CUPAPE4

Bornheimer posted an email exchange to Twitter, with screenshots wherein he emailed the station’s Captain Gavin McEachern. He noted the barricades are “an issue for pedestrians, people using bikes, and people with disabilities, and have negatively affected businesses and quality of life along the block of Valencia between 17th and 18th.”

Captain McEachern did respond, saying, “I can tell you that we have asked for a more permanent and atheistically [sic] pleasing replacement for these barricades, but as of yet our requests to the city have been ignored.”

When the SF Standard asked for clarification, Captain McEachern noted “The fences were installed during the time of the George Floyd protests and served to protect the station and the officers in front of the station during the many protests that gathered in front,” and that “Mission Station has been a targeted location for volatile protests in the past and continues to attract various protests.”

Ummm, since the summer of 2020? This seems a stretch, there have not been any notable protests directed toward the police department in some time. In fact, those new strings of light on Valencia Street have made the corridor, quite literally, a walk in the park these days.

And this continues a troubling trend of the city putting up gates and fences in public spaces, often with little outcome other than to just convey the symbolism of fear or a crackdown. This particular case conveys a sense of a department clinging to the victim card and political symbolism, amidst no apparent threat. And that’s a tack that could leave them fenced in.