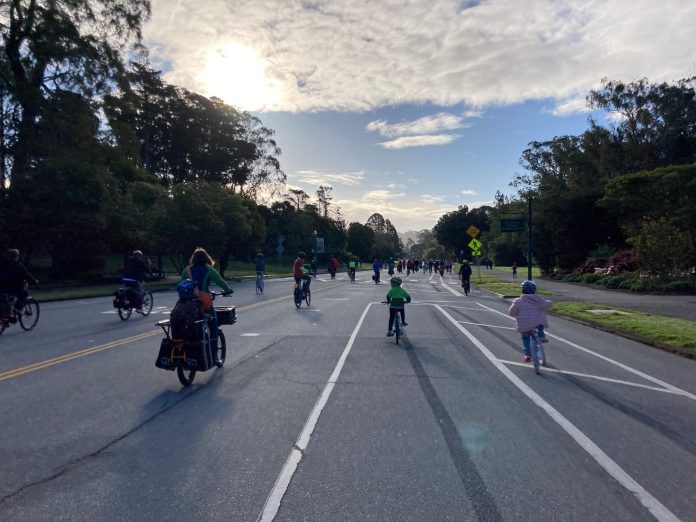 The JFK Promenade could get railroaded less than six months after it was officially declared permanently car-free, with a signature drive now underway for a ballot measure to bring cars back to JFK Drive as well as the Great Highway.

When the San Francisco Board of Supervisors voted in late April to make Golden Gate Park’s JFK Drive permanently car-free, the twelve-hour long debate indicated this was a highly contentious issue. But it’s really not; the debate went twelve hours because of nine freaking hours of public comment, and moreover, city surveys indicated that an overwhelming 70% of SF residents support keeping the thoroughfare car-free.

This ballot measure would go beyond reversing car-free JFK by undoing the car bans along stretches of Martin Luther King Drive and Bernice Rogers Way that together form a bike and pedestrian spine along the length of Golden Gate Park. https://t.co/BHTcp3d54Z

But the car-free party may be short-lived, with disability-rights advocates joining forces with the Fine Arts Museums of San Francisco — the de Young management in particular was unhappy about the loss of cars — to fight this at the ballot box. The Examiner reports that a measure to bring cars back to JFK Drive has been filed with the San Francisco Department of Elections. The measure hopes to make it onto the November 2022 ballot, and petition gatherers would only need 9,000 valid signatures to get the measure on the ballot.

And the proposition aims to bring cars back to more streets other than just JFK Drive. “The measure would also reverse the weekend closures of the Great Highway,” the Examiner adds. “This ballot measure would go beyond reversing car-free JFK by undoing the car bans along stretches of Martin Luther King Drive and Bernice Rogers Way that together form a bike and pedestrian spine along the length of Golden Gate Park.”

The disability rights advocate who uses a power wheelchair, Howard Chabner, sent an 11-page letter that made a case against a car-free San Francisco and included block-specific grievances — while still conveying an inextinguishable love for the city. https://t.co/V2R18PM6LN

The text of the ballot proposal lists the primary organizer as Howard Chabner, a wheelchair user who was profiled by the Chronicle in the relatively early days of pandemic-era car-free JFK Drive. Chabner is a retired attorney, serves on the board of the Facioscapulohumeral Muscular Dystrophy Society, and has lodged an ADA discrimination lawsuit or two in his day.

But the Examiner points out, and as you can see above, “It’s clear that the Fine Arts Museums of San Francisco, the de Young Museum’s parent organization, is involved as well. Four days after the ballot measure was filed, a political action committee called, ‘Access for All, sponsored by corporation of the Fine Arts Museums and Open the Great Highway Alliance,’ registered with the San Francisco Ethics Commission.”

People with limited mobility and disability are right to call for better access, and supervisors voting yes last night want results there. Several folks with disabilities underscored that a car-free JFK is in fact better for them, Carol Brownson among them. 8/ pic.twitter.com/GyuyRegpWZ

It’s not actually a consensus opinion in the ADA community that everyone prefers cars on JFK Drive. As we heard in the above-mentioned nine hours of public comment at the April board meeting, some people with mobility devices prefer to enjoy the JFK Promenade without cars on it.

The de Young Museum already hired a prominent lobbying firm prior to the board vote, according to the SF Standard, and the parent organization Fine Arts Museums has already posted a portal intended to whip up support for the measure. If it makes the ballot (and 9,000 signatures should be a snap to collect), this may be one of the biggest recent SF electoral battles pitting big money against broad popular support. Even if car-free JFK does have 70% support, we’ll see if that holds when the well-heeled Fine Arts Museums donors are calling all cars to defeat the idea.

Facebook
Twitter
Pinterest
WhatsApp
Previous articleShooting at Oakland Sports Bar Kills One; Same Bar Saw a Shooting In 2019
Next articleCEO of Once-SF-Based Crypto Exchange Kraken Wants Employees to Know That If They Want to Debate Pronouns They’re Welcome to Quit