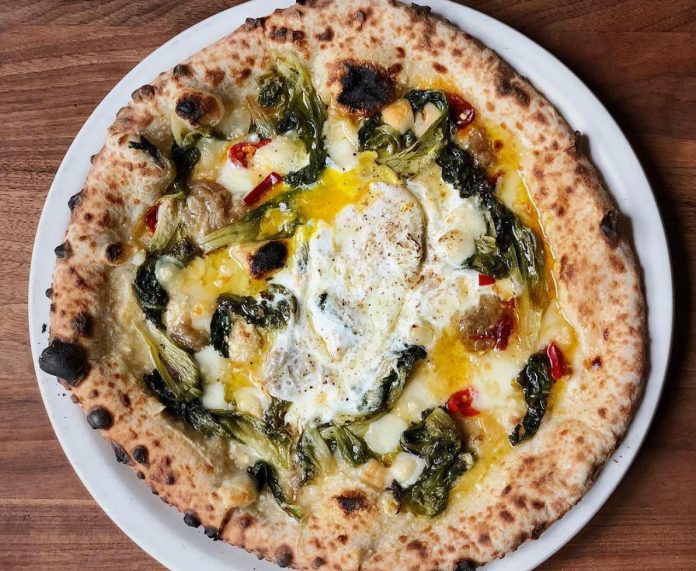 News arrived Thursday that Flour + Water Pizzeria is merely on a hiatus following that ownership split in which Flour + Water founding partner David White separated himself from former partners David Steele and chef Thomas McNaughton, who have now formed Flour + Water Hospitality Group with chef Ryan Pollnow and partners Kara Bratcher and Vanya Shekell. White took the almost three-year-old pizzeria and has renamed it Yellow Moto, and that is reopening after a remodel shortly.

A new Flour + Water Pizzeria will arise in North Beach next year, however, in the space that was the longtime home of Rose Pistola, at 532 Columbus Avenue. Eater broke the news, and says this big new location will become the pizzeria’s flagship, and it will be joined by delivery/to-go counter spots elsewhere in the city, at locations still to be named.

With 4,000 square feet and a big new bar to work with, the restaurant could evolve with a slightly different menu, but details are still to come. Eater notes that chefs McNaughton and Pollnow will “continue to refine their dough recipe” over the next year, and they’re “working with producers and farmers across Northern California to steer the menu direction.”

A new Flour + Water Pizzeria Instagram page is already up featuring the new Columbus Ave. address — White has taken the original Instagram account for the pizzeria and renamed it for Yellow Moto.

The timeline could be a long one, and they’re only promising “late next year” at this point, with Lundberg Design handling the remodel of the Rose Pistola space. The place has sat dark since Rose Pistola closed in early 2017, save for a few weeks as a pop-up from chef Joseph Manzare in early 2020, called The Ligurian.

Meanwhile, Flour + Water Hospitality Group seems to have a hit with Penny Roma, the pivot-change from Central Kitchen that opened last fall. Pollnow is overseeing a delicious, crowd-pleasing, pasta-centric menu, and new decor and a nightly soundtrack lend a “dinner party every night” vibe. Diners regularly line up before the place opens at 5:30 p.m. to snag the few walk-in tables available, and/or get on the list for one, and prime-time reservations have been booking up several weeks out.

Flour + Water itself just reopened with a remodel by Lundberg Design, offering eight pastas and two pizzas every night, along with starters — and its acclaimed pasta tasting menu, which is perhaps more pasta than you could want, with five pastas and five other courses for $125 per person.

Flour + Water Pizzeria – 532 Columbus Avenue and other locations, coming in 2023