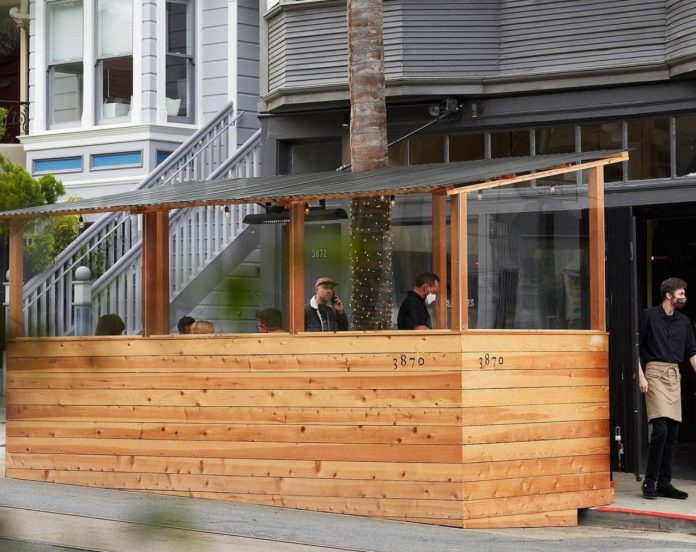 Frances Reopens In the Castro at Long Last, With New Family-Style Menu

It’s been an extra-long pandemic hiatus for Frances, chef Melissa Perello’s twelve-year-old Castro restaurant that has remained a perennial favorite for many. Save for a few weeks of outdoor pop-ups last fall in which Perello herself was in the kitchen, the restaurant hasn’t welcomed diners back since March 2020. But that changes tonight.

As of Thursday evening, Frances is back open, but the regular former menu — which changed fairly often but had several mainstay starter dishes — is no more.

As you can see from the reopening menu, it will now be a weekly changing prix-fixe going forward, served family-style, in the manner of the pop-up weekends. This weekend’s menu, served through Saturday, features four courses, beginning with crudités and flatbread, followed by lumache pasta with roasted and fresh cherry tomatoes alongside a little gem salad with stone fruit and comté cheese, and the main course is grilled king salmon with sunflower seed gremolata, served with a new potato salad. It’s $86 per person, with a $65 supplemental if you want wine pairings.

I’ve reached out to the team to see if fans of the restaurant can look forward to bacon beignets again in the future, and will let you know what the word is on that.

The restaurant reopens with a fresh remodel that’s been ongoing for several months, and a new chef de cuisine, Jordan Wittrock. A California native, Wittrock started his culinary career in the kitchen at AQ under chef Mark Liberman, and he then worked in the New York kitchens of Atera and Momofuku Nishi before spending a year working at the acclaimed Willows Inn on Lummi Island in Washington State. More recently he’s worked in the front of the house at Benu, and as executive sous chef at Tartine Manufactory.

Naomi Silva will be Frances’ new general manager, and Iris Rowlee will be serving as wine director.

In launching the pop-up dinners in the fall, Perello said that during the pandemic she began rethinking the restaurant, and how being inspired by what is freshest and in season in any given week.

“I was inspired to keep the menu unwritten for these dinners because, truthfully, this is how I love to cook,” Perello said. “I want to let the ingredients speak and create a meal around what’s freshest and most delicious in the moment. I want to be able to use fleeting ingredients and let the land dictate to me — rather than the other way around.”

This appears to be the driving ethos behind the new weekly-changing prix-fixe structure, which brings Frances more in line with the downstairs restaurant at Chez Panisse — where there is only ever one menu offered on a given night and no a la carte options.

Dietary restrictions can be accommodated, the Frances team says, but they ask that diners give them 72 hours advance notice to accommodate those.

The restaurant is taking reservations now, and will be open Wednesday to Saturday only, 5 p.m. to 9:15 p.m., going forward, with indoor and outdoor seating.