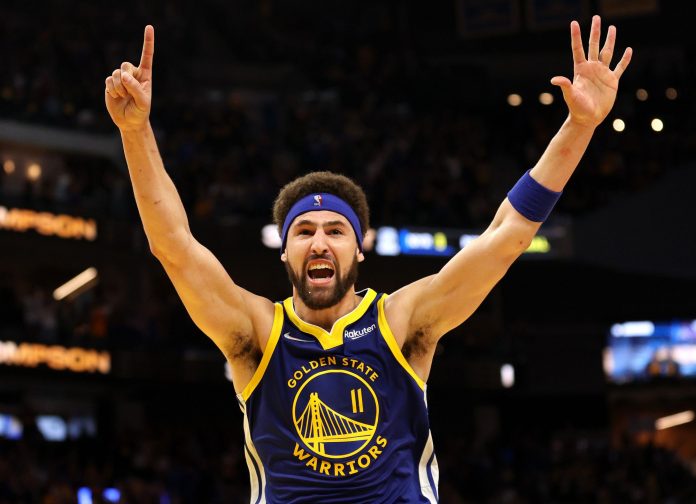 Walking through the Chase Center corridors after last night’s 110-96 Game 6 win over the Memphis Grizzlies, Stephen Curry said into a camera: “Ugly, hard-fought game. They’re a great team, they pushed us. We figured out a way to keep shooting. Hey, keep shooting — you make some eventually.”

It was a series full of chippiness and accusations of “breaking the code.” There were ejections, suspensions and injuries. After the Golden State Warriors were demolished in Game 5, the series had an anything-is-possible feel to it, and not in a good way. Despite the Dubs’ continued epidemic of turnovers — the Warriors had 17 to the Grizzlies 6 on Friday night — Golden State found a way to close out the semifinals and advance to face either Dallas or Phoenix next week.

Klay Thompson was on fire last night, and his swagger seemed contagious among his teammates. (Photo by Ezra Shaw/Getty Images)

Let’s talk about “Game 6 Klay.” You might recall the 2016 Western Conference Finals against the Oklahoma Thunder, when Thompson led a Game 6 comeback win with 41 points and 11 threes. Or how about Game 6 of the 2018 Western Conference Finals against the Houston Rockets, when Klay had 35 points and 9 threes to help even that series, before the Warriors finally advanced. A year later, in another Game 6 against the Rockets, Thompson had 27 points and 7 threes to help close that series out. It might be easy to forget that Klay was having an awesome Game 6 against the Toronto Raptors, with 30 points on just 12 shots, before he suffered the fateful ACL injury that, along with a torn Achilles, kept him sidelined until January of this year.

From his first few shots after the opening tip last night, Thompson was obviously feeling it. He led the Warriors with 30 points, shooting 11-14 from the field and 8-14 from distance, with 8 rebounds. At the postgame press conference, a reporter asked Klay, “Are there certain things about Game 6s that bring the best out of you?”

“I have no idea. I just love the moments, I love the pressure, I love playing basketball at the highest level,” Thompson answered. “Our careers — we’re not singers, we’re not actors. We can’t do this until our elder years. While we’re doing it, you’ve just to appreciate every single night, because it goes really fast.”

After coming off the bench the last few games, Kevon Looney started last night’s game, and was a force on the boards with an astonishing 22 rebounds. “Loon was unreal in the second half with his presence, his rebounding, and the way he impacted the game,” Steph Curry said at the postgame press conference. The Warriors had 70 rebounds in total on Friday night.

Kevon Looney was all over the ball last night, leading all players in rebounding with 22. (Photo by Ezra Shaw/Getty Images)

Last night’s announcers threw a bit of shade at Andrew Wiggins, noting that he had been an all-star this year, but went on to have a rough second-half of the season. During the opening round of the playoffs vs. the Denver Nuggets, the Warriors universally praised the play of Wiggins; Draymond Green said it was the “little things that don’t show up on the stat sheet” that had made Wiggins so valuable to the team.

Last night, Andrew Wiggins had 11 rebound and 18 points, shooting 7-16 from the field and 3-5 from three. But it was the timeliness of his shoots in the second half that kept the Warriors within striking distance. “He gave us life to start [the] fourth quarter,” Steph Curry said at the postgame interview.

Andrew Wiggins showed his all-star mettle on Friday night with a few clutch shots in the fourth quarter. (Photo by Ezra Shaw/Getty Images)

There were dozens of lead changes in Game 6, and neither the Warriors nor the Grizzlies could eke out a double-digit lead. Dillon Brooks — who is perhaps the most hated man in the Bay Area, and had been receiving a chorus of boos every time he touched the ball — had 30 points for the Grizzlies and 7 made threes, and always seemed to find an answer to any would-be Warriors’ run.

The Grizzlies were leading 89-87 with 6:30 left in the fourth quarter, when the Warriors finally began to pull away. Wiggins hit a three. On the next possession, Dillon Brooks dribbled the ball off his foot, and Wiggins got a breakaway dunk. 92-89, Warriors.

On the next possession, the Grizzlies put a few shots up in the paint but couldn’t score, Draymond got the rebound and charged to the other end, as Steph Curry, trailing, had his hand up, calling for the ball. Green fed him a bounce pass, Steph fired . . . Splash.

The Warriors got some work done in the paint to take a 99-90 lead, and with just under four minutes left, Steph was skulking around the three-point line and took a deep three. Splash. 102-92 Warriors, and the first double-digit lead of the game. With just under three minutes left, the Warriors had a wild possession. Steph fired a deep three to beat the shot clock, it was no good, and Looney got his 20th rebound of the night and fed it to Klay, who shot the three. Splash.

“And that might be the dagger,” said the announcers. And it was.

Steph Curry had 29 points on Friday, but it wasn’t his most efficient night; he shot 10-27 from the field and 6-17 from three. (Photo by Ezra Shaw/Getty Images)

“I think we can continue to play better,” Steph Curry said at the postgame press conference. “We won and we figured it out and we showed our competitiveness and our know-how to win down the stretch, but we can continue to build on this as we look forward to the next round no matter who we play.

“Not lost in this journey is the fact that we’re still trying to peak at the right time, as a team that’s going through this for the first time together.”