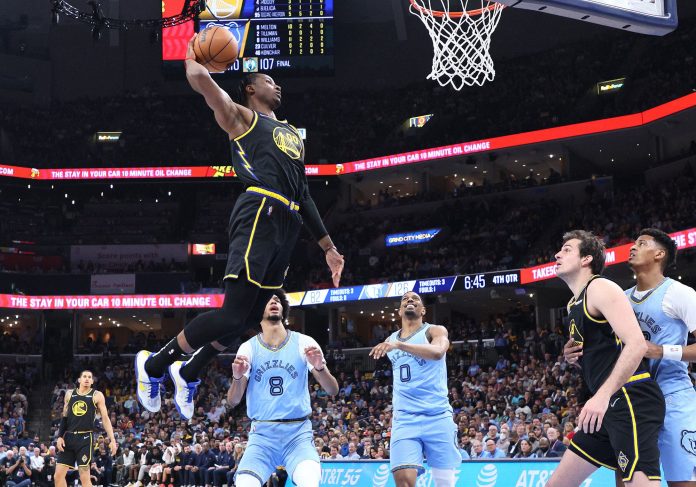 Grizzlies Destroy Warriors in Game 5, Series Heads Back to the Bay

Which Warriors would show up to a potential close-out Game 5 last night in Memphis? Would it be the high-scoring, high-splashing Golden State Warriors of Game 3, who shot, like, 142% from the field and basically dominated the Grizzlies? Or would it be the Game 4 Warriors, who turned the ball over, like, 206 times, and in terms of shooting the ball, couldn’t seem to hit water even if they fell out of Klay Thompson’s boat?

Wednesday’s beating might feel crushing, even ominous. Analysts and nervous fans will no doubt mull over the Warriors’ streaky tendencies and proclivity for turnovers, and wonder what it all foretells as the postseason grinds on. It’s easy to forget that Golden State retains the upper hand in the Western Conference Semifinals with a 3-2 series lead, and another chance to close out the Grizzlies on Friday at Chase Center.

Last night in Memphis was, to put it lightly, brutal. I needed to consult a thesaurus for synonyms of “demolished.” (Routed, crushed, obliterated, walloped, destroyed, etc.) It was one of the roughest games of the season that this writer can remember. And, oh yeah, the Grizzlies are also down one superstar, as Ja Morant is “doubtful” for the remainder of the postseason — however long it may last for Memphis — with a bone bruise in his right knee.

But for the Grizzlies last night, it mattered not. They would go on to beat the Warriors 134-95 to force Game 6.

At the postgame press conference, a reporter asked Stephen Curry: “What was the most disappointing part about that performance?”

“. . . Everything,” Curry answered. “On the road, you give a team that’s playing with desperation life… you don’t think you’ll lose by 40, but you can lose control of the game pretty quickly.”

Let’s look at some Warrior highlights from last night:

Draymond Green got a break-away dunk in the first quarter, and the Warriors hovered within a few possessions of Memphis. (Photo by Andy Lyons/Getty Images)

“I mean, we played decent in the first quarter — not great, but it was OK,” said Draymond Green on his podcast.

With about four minutes left in the first, the Grizzlies’ Steven Adams couldn’t finish on multiple chances under the rim, and Stephen Curry eventually broke away to the other end of the floor, then stopped, stepped behind the three-point line, and fired. Splash.

The score was 24-23 in favor of Memphis, the Warriors had just gone on an 8-0 run, and though the Dubs were still turning the ball over at a mind-boggling rate — they had 14 giveaways in the first half, and 22 on the night — it looked like a super-competitive game was about to unfold. Klay Thompson seemed to find an early rhythm, and led the Warriors in scoring with an efficient 19 points.

After a pretty cold Game 4, Klay Thompson shot 7-12 from the field and 3-6 from three on Wednesday.(Photo by Andy Lyons/Getty Images)

And then the wheels came off.

“I thought, very early in the game, the turnovers weren’t bad, but then they got out of hand,” Green said last night. “When you turn the over ball 22 times, [and] you give up 18 offensive rebounds, that’s tough to overcome. You add in that they shot the lights out the ball, it’s tough to overcome.”

Less than two minutes into the second half, the Grizzlies were up by 35 points, and would never let their foot of the gas. The Warriors sent their bench on the floor with more than four minutes left in the third quarter, with the score at 105-61. At one point, TNT announcer Ian Eagle said something like, “I’m going to stop pointing out the Grizzlies’ runs — the whole game is a run.”

The Grizzlies’ Desmond Bane had a breakout game last night with 21 points; tying two of his teammates as the Grizzlies’ highest scorers. (Photo by Andy Lyons/Getty Images)

“I don’t think it’s anything for us to panic about,” said Draymond Green of Wednesday’s epic loss on his podcast. “We understand this is a different team. We have to play this team differently. You almost have to make the adjustment as if we starting an entirely different series. Our game plan was built around Ja Morant.”

At the postgame press conference, Steph Curry said: “It’s the playoffs. You’ve got to be prepared for anything and have a short memory. [We’re] still in control of the series. [We’ll] go home and protect our home court like we done all playoffs.”

(Otto Porter Jr., who had been hot the last few games, left after the first half of Game 5 with an apparent foot injury. There is no word yet on his availability for Game 6.)

Here’s a highlight from last night’s game that’s been making the rounds on social media. In the fourth quarter, with the Warriors down by 46 (which is almost my age), “Whoop that Trick” was blasting over the PA. Needless to say, the Memphis fans were feeling it at that point, but the Warriors were feeling it, too.

“It’s the best — it’s what this whole back and forth is about in terms of home-court advantage and hostile crowds,” said Steph Curry at the postgame interview. “You embrace all of that. It’s fun, even when you’re getting smacked, you gotta find some fun in it.”

The moment was a reminder for nervous fans, like me — who are preoccupied with worry about what a blowout means and what the next few games (and, God willing, series) might hold — to have fun.

“They not gonna whoop that trick alone, we gonna whoop that trick together if we gonna whoop that trick,” Draymond Green said at the postgame press conference. Later on his podcast, Draymond said: “I had fun at the game tonight with [singing the hook], ‘Whoop. That. Trick. Get ’em. Whoop. That. Trick.’ It was loud in there when they played that by the way. And, as you know, I started waving my towel. Because, for me, I talk a lot. I talk junk . . . I’m a talker. And, I don’t respect guys who, when it’s all beautiful, and you winnin’ and everything’s going great, and then when it’s not, you just sit there.

“I love silencing the crowd on the road. I take pride in that; there’s no better feeling. Well guess what, when they got the upper hand and they’re embracing it and they’re going crazy, you can’t sit there like this [head down, looking forlorn]. I’m gonna have a good time in here, too.”