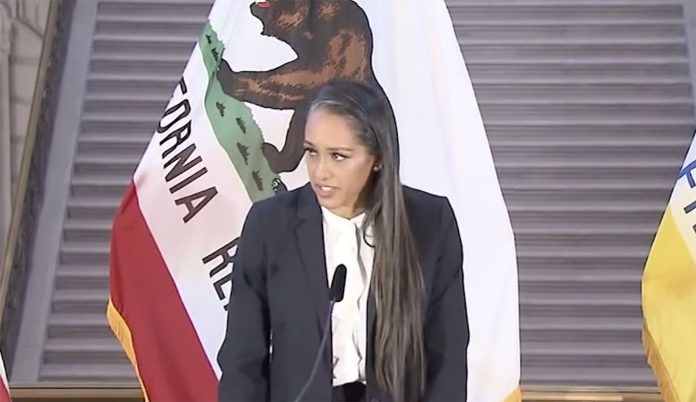 Newly installed SF District Attorney Brooke Jenkins will have her work cut out for her managing a transitional DA’s Office, being perceived as tougher on crime than her predecessor, and also sticking to progressive ideals about incarceration. But she is starting to explain how she’ll do that.

No sooner had the news broken Thursday that Brooke Jenkins, one of the faces of the campaign to recall SF District Attorney Chesa Boudin, was being installed as his replacement, than the New York Times got her on the horn for a quick interview.

The California Today column put Jenkins’s appointment front and center today in the Times, and we have the first post-recall-ad interview with Jenkins, in which she both tries to put her campaigning against her former boss behind her, and tries to cast herself as both progressive and tough on crime.

Whether or not you supported the recall of Boudin, I think we can all agree that being DA in San Francisco right now is likely to be a thankless job, and that Jenkins will have a tough task ahead to solve all of the city’s crime woes in time for voters to fully elect her in November.

Jenkins explains that the District Attorney’s Office has “lost hundreds of years of prosecutorial experience over the past two years,” and “There’s a lot of healing that needs to go on in that office.”

And while there were reports of low morale and some disfunction happening in the DA’s Office during the last year, there were conflicting reports that this was all being overblown due to the recall campaigners’ efforts.

Jenkins says that she will now have to face the task of uniting two disparate factions among the lawyers working in the DA’s office.

“The office has been divided for some time now, between pre-Chesa staff and post-Chesa staff and we can no longer function that way,” Jenkins tells the Times. “We need to be one office, one team with one aligned mission, and that is to ensure that San Francisco is safe, and that we are being advocates for victims.”

But how do you square progressive ideals around social justice reform and being tougher on crime to a degree that “makes people feel safe.” Boudin didn’t seem to be able to do it successfully, so how will Jenkins?

Mayor London Breed said Thursday, in announcing Jenkins’s appointment, that when it comes to holding criminals accountable and sticking to progressive ideals around incarceration, “We can and should have both in a city like San Francisco.”

She also adds, “We’ve got to work hard to serve as a deterrent to whatever is driving crime — be it the pandemic, be it lenient policies that criminals have become aware of.” And, she concedes, “by no means did I ever blame all crime on Chesa Boudin. No district attorney can snap their fingers and do away with all crime.”

When it comes to managing an entire office of prosecutors and investigators, Jenkins, 40, may not have much more experience than Boudin, who came from the Public Defender’s Office. A colleague who resigned from Boudin’s office the same day that Jenkins did, Donald du Bain, tells the Chronicle, “She and I talked about our dissatisfaction with [Boudin’s] management in the summer of 2021.”

None of us can say how Jenkins will fare in the new role, or if her personality or political skills will make her better suited to it than Boudin — I don’t think many would argue that Boudin is a good politician. We only know that at some point two years ago she was, according to emails obtained by the Chronicle, very happy to be working for Boudin and supportive of his policies.

But Jenkins has repeatedly said that she has great empathy for the families and parents of homicide victims, and that she is passionate about holding perpetrators of violent crime responsible. In yesterday’s press conference announcing her appointment, Jenkins explained that she decided to become a prosecutor after the death of a son she gave birth to prematurely — which is a bit of an odd equivalency, but she explains that it gave her deep empathy for parents who lost children to crime.

We know that a breaking point for Jenkins, vis a vis Boudin’s choices, came with the acceptance of a hung jury and the lack of willingness to fight an insanity plea in one particular murder case.

That case, which dated back to Easter 2020, involved a young mentally ill man living with his parents, Daniel Gudino, who killed his mother because he allegedly believed she was a cyborg. Multiple experts testified to the fact that Gudino was seriously mentally impaired, and the jury hung 7-5 in favor of declaring him legally insane. The jury nonetheless convicted him of second-degree murder, and Gudino is now in a state mental hospital.

Jenkins, who was apparently overruled by her immediate boss and by Boudin in the handling of the case, later spoke to the Examiner and said. “You simply can’t ignore the victims in a case.” She added that she “would have been fine” with the outcome if the jury had not hung on the insanity question, but she left feeling like Gudino was not being held properly accountable for the killing. Jenkins was firmly on the side of Gudino’s stepfather, who opposed the insanity plea, but Gudino’s biological father supported it.

“I absolutely believe that [Gudino] was simply angry with [his mother] for many years of feeling that she was not the type of mother that he believed she should be,” Jenkins said of the case.

Boudin has not yet said whether he plans to run for the office again in November, or if he might wait to run for a full term in 2023, or if he may just seek greener pastures.

We’ll see if Jenkins has any better luck when it comes to high-profile cases that land on her desk between now and November.

Facebook
Twitter
Pinterest
WhatsApp
Previous articleBallot Measure Heads for Approval That Would Create Oversight Commission for SF’s Dept. of Homelessness
Next articleElon Musk Had Secret Twins With One of His Companies’ Top Execs, Now the Mother Might Be In Line for Twitter CEO?