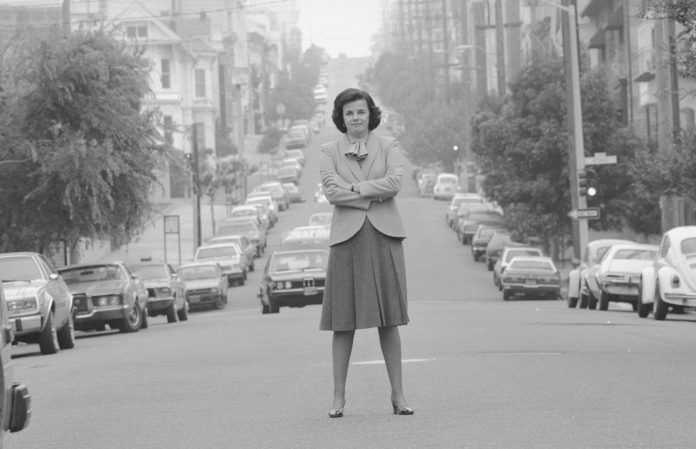 It’s a testament to the dearth of print media in San Francisco’s current era that New York Magazine has just done a cover story and lengthy, historical profile of Dianne Feinstein this week — and this not being a hometown publication, they went with an extraordinarily unflattering photo of the 89-year-old senator.

The 8,000+-word piece by Rebecca Traister, published today, is headlined “Dianne Feinstein, the Institutionalist.” And rather than focus on recent rumblings about Feinstein’s diminished mental fitness for the job, it takes a long view on her career and the ways in which “the pernicious trap [of power] has created the bipartisan gerontocracy under which we now wither” in the U.S. Congress.

And while New Yorkers certainly have their own centrist, arguably ineffectual elder senator to gripe about in Chuck Schumer, Feinstein is NY Mag’s covergirl nonetheless.

Over the course of 52 years in elected office, Dianne Feinstein believed she could use the system for good. Despite everything, she still does. @rtraister reports https://t.co/nMEYCvRZeM pic.twitter.com/vfcUV643wb

(The unflattering photo by Philip Montgomery for NY Mag)

Traister is fairly kind about the dementia rumors, confirming that some colleagues have noted that Feinstein remains sharp some days, and then some days needs a lot of patience. And, Traister writes, “the fact that many of her colleagues, on their best days, are less acute than Feinstein on her worst is exactly the kind of dismal, institutionally warped logic that has left us governed by eldercrats who will not live long enough to have to deal with the consequences of  their failures.”

The big takeaways here for those who don’t know Feinstein’s compelling life story are that a) she almost gave up her political career while she was still a San Francisco supervisor, believing at the time that she was too moderate to reign in the extremes of SF politics; and b) she was once one of the most progressive, most pro-LGBTQ voices in the federal government, both when it came to gun control and the AIDS epidemic. The trouble is that the times have changed around her, and she stands among an old guard of senators who seem to still have faith in a kind of civility and tactical patience that younger voters have no time for.

As the storied career of one of the nation’s longest-serving Democrats approaches its end, it’s easy to wonder how the generation whose entry into politics was enabled by progressive reforms has allowed those victories to be taken away. And how a woman who began her career with the support of conservationist communities in San Francisco, and who staked her political identity on advancing women’s rights, is now best known to young people as the senator who scolded environmental-activist kids in her office in 2019 and embraced Lindsey Graham after the 2020 confirmation hearings of Amy Coney Barrett, a Supreme Court justice who appears to be the fifth and final vote to end the constitutional right to an abortion. As Feinstein told Graham, “This is one of the best set of hearings that I’ve participated in.”

Traister spoke to longtime local LGBTQ and union activist Cleve Jones, who gave several terrific quotes about Feinstein. On the topic of her still being sharper than of her colleagues on their best days, Jones says, “I’ve worked in politics my whole life, and met a lot of politicians who are little more than cardboard cutouts propped up by staff. It’s important to understand that she was never that person.”

Jones recounts the tale of how Feinstein was ready to retire from politics in November 1978, having just returned from a trip to the Himalayas with the man who’d become her third husband, Dick Blum, having contracted dysentery. Just before Mayor George Moscone and Supervisor Harvey Milk were assassinated, elevating Feinstein to the role of mayor, she was resigned to giving it all up. “It’s important to remember that she thought her career was over before it even began,” Jones says.

Jones also recalls how Feinstein, while she tried to navigate the AIDS crisis as mayor of San Francisco, was a target of his and his friends derision even if she was an ally in many ways.

“I’m a very far-left union organizer and queer radical,” Jones tells Traister. “And buddies and I would go to a bathhouse and sit in that big Jacuzzi and conspire to drive Dianne nuts. [But] I remember talking with someone about how she was really walking a tightrope, the compassion she showed for people with HIV at a time of incredible stigma and misinformation and hysteria.”

Whether this lengthy profile moves the needle any for anyone who may be angling to get Feinstein to retire remains to be seen — but let’s say probably not. The point of the piece seems to be to inspire sympathy and gratitude for a member of the old guard of feminists who now wields significant power still, and to have younger people understand that she’s probably not going to see things with any more clarity than your grandmother sees them these days, though she certainly has a much longer view of political change than you probably do.

As San Francisco writer and SF native Rebecca Solnit is quoted as saying, “Feinstein feels like a bridge to me, a fixed point in the landscape that helped us cross out of the old, worse world, in which women were not senators… [But] we have traveled a long way from that bridge now.”

Dahlia Lithwick, a senior legal analyst for Slate, gave a less positive spin to NY Mag on Feinstein’s current predicament in today’s politics. “She’s like Charlie Brown and the football. But she doesn’t see that the whole football field is on fire.”

Related: The New York Times Has Now Done Their Take on the Dianne Feinstein-In-Decline Story

Top image: San Francisco Mayor Dianne Feinstein stands in the middle of Steiner Street in 1981 looking tough to illustrate her campaign of “taking a stand” against crime in San Francisco. (Photo by © Roger Ressmeyer/CORBIS/VCG via Getty Images)