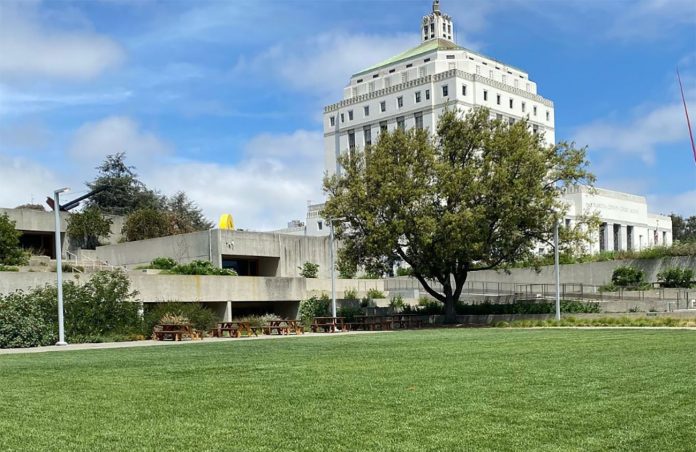 Town Fare Cafe, the restaurant at the Oakland Museum of California, isn’t exactly new. But it’s been remade twice now under different chefs, and the latest iteration debuts today with a menu of Southern classics and new-school cocktails, and a brand new patio.

Town Fare first opened in the hopeful month of June 2021, with a daytime, plant-based soul food menu from chef Tanya Holland. Holland was already in bankruptcy proceedings at that point with her primary business, Brown Sugar Kitchen, which would ultimately close for good in the fall — though the closing announcement did not come until January 2022. A month later, Holland parted ways with the Oakland Museum as well.

Since then, the museum cafe has been run by Hawaiian Tongan chef Puaokalani Barquis on a temporary basis, with a menu of Hawaiian-influenced food. But now, as Eater reports, the new permanent chef has been selected and it is Michele McQueen, who formerly ran Gussie’s Chicken & Waffles in SF’s Fillmore District from 2009 to 2014.

“We are excited to welcome Chef Michele McQueen,” said Lori Fogarty, executive director and CEO of the museum, in a statement. “Her approach to food and hospitality are the perfect fit for OMCA – both embody deep commitment to bringing people together through art, history, and science with a ‘town flare’ that is signature Oakland.”

McQueen had previously opened a NorCal location of LA-based Roscoe’s Chicken & Waffles, and she knows a thing or two about fried chicken. It will be at the center of the new menu at Town Fare, served with cornbread, red beans and rice, and chow chow. And she’ll also be serving low country shrimp and grits with chicken andouille sausage, a fried green tomato Caprese salad, and a trio of Southern-inspired dips with flatbread — pimento cheese, collard green dip, and black-eyed pea hummus. There’s also a dish of grilled salmon over field pea succotash.

“Oakland represents many different cultures and I want the menu at Town Fare to be a reflection of that,” McQueen said in a statement.

The new cocktail menu includes Soulgria — McQueen’s take on sangria with cognac, red wine, spices, and fruit — and a Bissap Rum Punch with sorrel, allspice dram, and lime. And the beer and wine menu focuses on Black-owned breweries and wineries, including Wachira Wines and Hella Coastal Brewery.

It’s a limited-hour situation for the full menu at Town Fare, which is only open during museum hours, 11 a.m. to 5 p.m., Wednesday to Sunday. But the new 45-seat patio will be offering evening service with cocktails and a limited food menu from 5 to 9 p.m., Thursday to Saturday. And if you haven’t seen the terraced gardens that form the back portion of the Oakland Museum, then you’re missing out — and that is what the patio looks out on.

The patio opens for its first service tomorrow, Thursday, July 14, but the cafe is open with McQueen’s new menu as of today.

Facebook
Twitter
Pinterest
WhatsApp
Previous articleOakland Man Shot and Killed — While Celebrating His Birthday — In Uptown Neighborhood
Next articleCOVID Hospitalizations Climb Back to February Levels In Bay Area and California; Cases May Be Headed For Another Peak