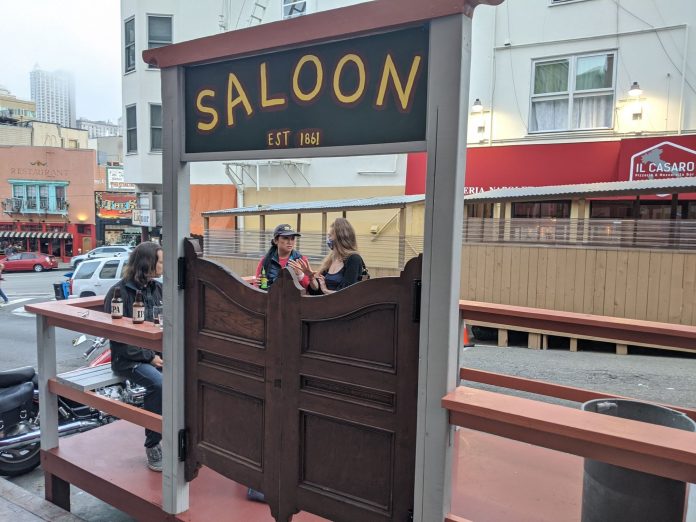 While the “Shared Spaces” program is spawning permanent, lovely parklets in SF and the greater Bay Area, a quagmire of new permits, regulations, and costs will be kicking in soon.

There’s a nice feature about outdoor dining areas becoming permanent today on NBC Bay Area, with Los Gatos’ Sidecar Modern Tavern owner Josh Allen saying his parklet structure “increases our seating capacity by 20-25%, which will really help on the road to recovery after a tough couple of years.” You’ll notice he’s speaking in the future tense! Whether you call them “parklets,” “Shared Spaces,” “outdoor dining,” or “al fresco dining,” many bars and restaurants with these pandemic-era improvised structures are planning to keep them there permanently, providing both a new revenue stream and a new way for customers to get the most out of their drinking or dining experience.

But the program may be less permanent than you think. I was recently admiring one Mission District bar’s parklet, and asked the owner about his plans for them. He calmly responded, “I’ll keep them there until the city starts making me pay for them.”

Shared Spaces are officially here to stay in San Francisco!

These parklets and outdoor spaces have been a lifeline for our small businesses and our neighborhoods throughout this pandemic. With this legislation, they will continue for years to come. pic.twitter.com/rmylfLZTI8

Oh sure, Mayor London Breed ostensibly “made parklets permanent” with legislation last July, but that doesn’t tell the whole story. For parklets as we currently know them, that legislation merely means their permits were “automatically extended to expire on June 30, 2022.”

Less than three weeks from today, there is an application due for any establishment that wants to make their parklet truly permanent. (The application is here). The permit requires proof of neighbor consent, a safety and ADA accessibility site plan, and posting 10-day public notices about your plans (which means someone could squawk and thwart those plans). That application is due by March 31, 2022.

If a parklet is at an intersection, shit only gets hairier on April 1. On that day, “Some parklets near intersections may need to re-size, relocate, or be removed.” Certainly corner parklets have experienced accidents, but this is more red tape for those businesses, just because they happen to be located at a corner.

D-Day for parklets is July 1, when they must be permitted under the new system, or they have to be gone. In addition to the above regulations, a parklet must have public benches that are “open to the public, indicated with a sign,” and have a three-foot setback from the nearest parking space.

But in the words of my bar owner friend, the city will not technically “start making you pay for them” until April 2023. Obviously, there will be compliance and build-out costs, but the permanent Shared Spaces permit will not have an associated fee until just over a year from now.

The regulations described above are just for San Francisco, each other city and county will have their own set of rules. But when you’re sipping Bloody Marys in the sun at a parklet, and thinking this arrangement is permanent, realize this arrangement is not permanent. And the establishment’s owner is probably having a bloody difficult time with the red tape.

Related: ‘Best Parklet in the City’ Trashed by a Vandal, and Police Reportedly Did Not Intervene [SFist]