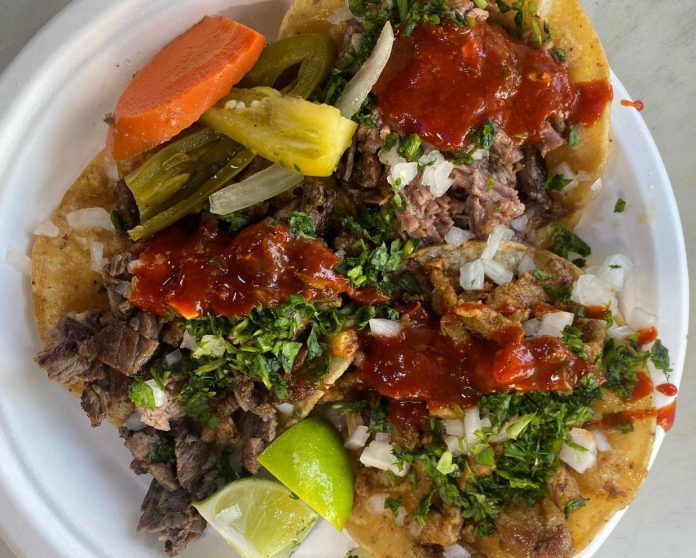 A highly sought-after taco truck is becoming a brick-and-mortar over in Oakland, with Tacos El Último Baile set to take over the cozy Fruitvale restaurant space that was recently vacated by another popular establishment, Nyum Bai.

Berkeleyside had the news about Tacos El Último Baile new permanent location a few weeks back, with owner Dominic Prado saying that he thought he’d lost the Nyum Bai space to another tenant. The landlord reportedly reached back out and said that deal had fallen through, and now Tacos El Último Baile is headed for the Fruitvale Public Market spot at 3340 E. 12th Street.

“I started out late nights at the bar in downtown Oakland, I scaled up to the food trailer and busted my ass to get past the first two COVID years,” Prado says, referring to the pop-up taco stand he launched in 2016 on weekends outside Oakland’s Legionnaire Saloon. “What was next was my day to day question coming into this year. Was this the year that I finally get a space?” Prado writes.

Prado specializes in Northern Mexico-style tacos, with meats grilled over mesquite charcoal, simple ingredients, and some legit handmade flour tortillas from Tortillas De Harina MamaCuca, another homegrown Oakland business, and corn tortillas from La Finca. Favorites among his customers are the 16-hour smoked brisket, the ribeye, and al pastor tacos.

“It costs me more to make stuff from scratch, but I think it’s worth it,” Prado tells the East Bay Times. “It’s a good way to respect my people and culture.”

The name, El Último Baile, means “the last dance,” and it’s a tribute to Prado’s grandmother, who instilled in him his love of food.

“[My grandma] loved to dance,” Prado told Berkeleyside last year. “I spent the last couple years of her life with her, and it occurred to me that it was her last dance.” He adds, “Growing up, we never ate out. Seeing her whip up stuff from scratch was the biggest influence.”

On the GoFundMe page, Prado also says the name “encompasses a mood, the last dance of the night, a spirit of celebration.”

The much-lauded, always-crowded Cambodian spot Nyum Bai announced its closure in May, with chef-owner Nite Yun saying her lease was expiring and it was time to expand to a bigger space. Yun, whose team was out at Outside Lands last weekend serving Cambodian fried chicken and noodles, has not yet revealed the restaurant’s new location, but said the restaurant would relocate in the “near future” — but that was back in May.

Tacos El Último Baile doesn’t have a definitive opening date, but Prado tells the East Bay Times this week that he’s aiming to open by October 1. For now you can still find him outside Legionnaire (22nd & Telegraph) on some weekends — follow him on Instagram to be sure.

“I look forward to serving the Fruitvale community and creating a space that brings folks together for the greater good and even better tacos,” Prado says.