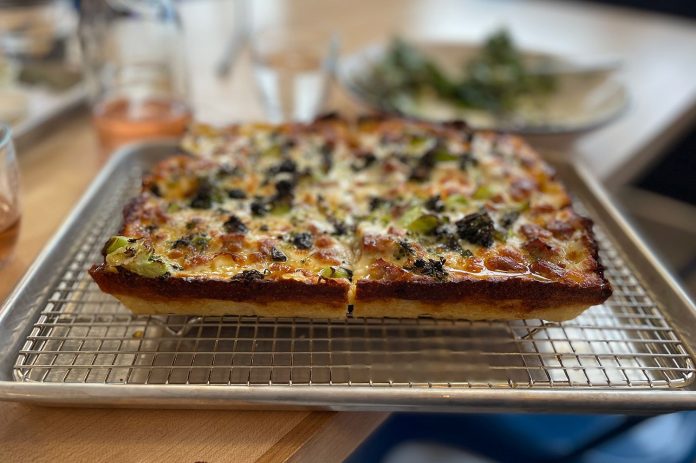 A deep-dish, Detroit-style pizzeria that became a pandemic delivery hit, Square Pie Guys, is ready to welcome San Franciscans — and wharf tourists — in for a sit-down meal in Ghirardelli Square.

Square Pie Guys moved in to the space across from the Ninth Circuit courthouse on Mission Street in mid-2019, not long after it was vacated by Deli Board spinoff The Board — the space was also formerly home to the restaurants TBD and Fenix. It was the project of partners Marc Schechter and Danny Stoller. Schechter previously worked at Pizzeria Delfina, but the pair saw an opportunity with the square, cheddar-crusted, Detroit-style trend, launching a pop-up in 2018 at Vinyl Cafe on Divisadero before opening the SoMa shop.

Fast forward less than a year, and pizza became even more popular of a comfort food than it already was. San Franciscans hunkering at home kept Square Pies very busy in those months, and soon they were branching out to Oakland, where Schecter and Stoller both live.

The square-pie craze, meanwhile, hasn’t let up, and began in earnest in SF with the opening of Cellarmaker House of Pizza just a few months before Square Pie Guys opened their first brick-and-mortar. We now have Sunset Squares in the game, as well as Joyride Pizza and Pizza Squared, not to mention the prolific Tony’s Pizza Napoletana, which has had a Detroit section on its North Beach menu for a decade.

Now Square Pie Guys has opened its biggest location to date, a flagship property in what was formerly the Pub at Ghirardelli Square, on the waterfront/Beach Street side of the Ghirardelli complex. SFist first reported the news back in February, and Saturday marked the official opening.

The new space offers ample indoor and outdoor seating, a “living wall” plant installation, and a selection of beer and wine on tap — not to mention the opportunity to experience Schecter’s finely crafted square pies fresh out of the oven, without a sweaty rest in a delivery box.

The elements that make a Detroit-style pizza sing — crispy browned cheese at the edges of the crust, fluffy, focaccia-like dough beneath, and the occasional slather of red sauce on top — are all here. And Square Pie Guys boasts some unique combos on the menu that make them stand out — like the Ellen Supreme, which is a vodka-sauced pie with Italian sausage, pepperoni, cherry peppers, caramelized onion, and roasted mushrooms.

The pizzas are sauced one of three ways — with vodka sauce, standard red sauce, or white sauce — and there’s no skimping with toppings. Other options include the Shay Diddy — white sauce, sausage, roasted broccoli, chili flakes, and hot honey — and the highly untraditional, pastor-inspired combination of pork and pineapple, which comes with vodka sauce, slow-roasted pork, charred pineapple, jalapeno, taco seasoning, and a cilantro-onion salsa.

And also at Square Pie Guys, there’s dipping-sauce action to be had, with four total options. You can get a three-pack of the standards — ranch, cilantro crema, and chipotle crema — or you can get crazy with a side of green goddess.