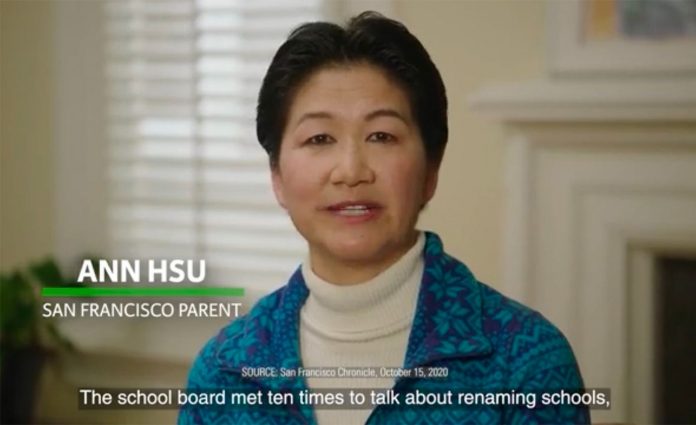 A San Francisco school board member who was recalled earlier this year faced an outcry last year over resurfaced tweets that many felt reflected racist tropes and Black-on-Asian racism. Now a newly appointed school board member, who is Asian, is being accused of racism toward Black and brown people, and an SF supervisor has called for her resignation.

The high drama at the San Francisco Board of Education likely won’t recede anytime soon, and the latest development involves one of three board members appointed by Mayor London Breed to replace the board members who were recalled in a special election in February. Ann Hsu, who joined the board just four months ago, is now the subject of some drama, after comments she’d made on a questionnaire came to light in which she disparaged the families of Black and brown students.

The comments were made, as the Chronicle reports, on a candidate questionnaire for a parent group endorsement for the coming November election. In those comments, Hsu referred to the “unstable family environments” of Black and brown students, and the “lack of parental encouragement to focus on learning” as the biggest challenges facing these students.

On Tuesday, Hsu took to Twitter to post an apology in a thread. She said, in part, “My statements reflected my own limited experiences and inherent biases. I made a mistake, and I am deeply sorry.” Also, she said, “I was trying to understand and address a serious problem and seek solutions, and in so doing I said things that perpetuated biases already in the system.”

[3/8] First, I believe that the institutional racism that is deeply embedded in our society harms students and their families.

Mayor London Breed, who appointed Hsu to the board in March, called her comments “wrong and hurtful,” and Breed said, “There’s a difference between recognizing systemic inequality and perpetuating harmful stereotypes.” But, she said it was “important” that Hsu apologized, and she should now “listen and reflect.”

On Wednesday, Board of Supervisors President Shamann Walton called on Hsu to resign, saying, “Yeah sure, thank you for the apology, but at the end of the day this is probably reflective of how a person really feels. It’s disheartening that someone like that is in a position to make decisions for our children.”

Saw this and immediately thought how incredibly ignorant she sounds. Anyone reading this and accepting it as normal behavior by a school board member should be ashamed.

This controversy echoes one that erupted in March 2021 and presaged the school board recall effort. In that episode, former Board of Ed Vice President Alison Collins was called out for tweets she tweeted in late 2016 in which she criticized Asian parents and referred to “Tiger moms” and “model minority BS” in a thread about anti-Black racism at her daughter’s mostly Asian American school.

We’ll see how much further this controversy will go, or if there will be more calls for Hsu to step down. Supervisor Hillary Ronen tells the Chronicle that Hsu’s continued position on the board should just left up to voters, as she will have to run for her seat in November. “The voters should decide because she is so new and did unequivocally apologize,” Ronen says. “However, because her comments are flat out wrong and reveal a shocking lack of understanding about systemic racism and generational poverty, I will not be voting for her or endorsing her candidacy.”

Hsu was one of the main organizers of the effort to recall former board members Collins, Lopez, and Faauuga Moliga. The 54-year-old entrepreneur and immigrant from China has two sons attending Galileo High School, and she told the Chronicle earlier this year that she joined the recall effort because she was “pissed off” by the behavior and actions of the former school board members. She has also been vocally opposed to ending merit-based admissions at Lowell High School — a cause that was supported by the three former members, and that is widely opposed among the Asian American parent community.

Hsu’s more full response to the questionnaire was as follows:

“From my very limited exposure in the past four months to the challenges of educating marginalized students especially in the black and brown community, I see one of the biggest challenges as being the lack of family support for those students. Unstable family environments caused by housing and food insecurity along with lack of parental encouragement to focus on learning cause children to not be able to focus on or value learning. That makes teachers’ work harder because they have to take care of emotional and behavioral issues of students before they can teach them. That is not fair to the teachers.”