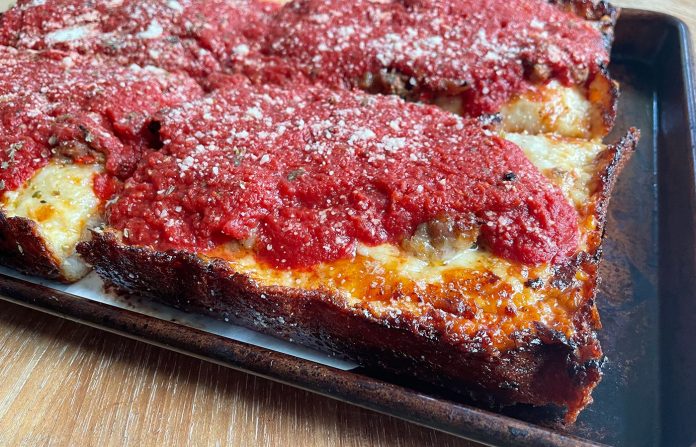 Detroit-style pizza has kind of taken the country by storm in the last several years, and San Francisco is no exception. And what’s not to love, really, when it comes to the style’s deep-dish crispiness and burnt-cheese edges.

It wasn’t so long ago that San Francisco was a kind of pizza desert — you had a couple of slice shops that locals liked, but by and large, we were no New York and the pizza renaissance of 1990s and early 2000s in multiple cities had largely passed SF by.

And while even mediocre pizza can often hit the spot, just by virtue of being pizza, not all pizzas are created equal. In the last decade and a half, San Francisco has come into its own as a great pizza town, and home to specialists of multiple styles — though we still mourn the loss of Una Pizza Napoletana, RIP.

Today we focus on the trendiest pizza style of the early 2020s, which is square and Detroit-inspired. True Detroit-style pizzas, as connoisseurs will tell you, should have cheese on top of dough — traditionally sliced Wisconsin brick cheese — and cheese piled at the edges of a sheet pan that creates that signature crunchy, fried-cheese crust. The rendered fat from the cheese helps create a fried crust on the pizza’s bottom as well, and then sauce is strewn across the pizza’s top, which prevents it from sogging the dough below.

Not all of SF’s examples of the Detroit style, most of which arrived here since 2019, adhere fully to the traditional form — and only a couple do the sauce-on-top thing. But all of them attempt to replicate and/or improve upon the Detroit’s style’s delectable and crunchy-fatty crust, which is essentially the polar opposite of the thin, soft, Neapolitan style.

Below, we offer our ranking, based on rigorous taste-testing, of San Francisco’s six primary purveyors of the Detroit(-ish) square-pie genre.

Chef Dennis Lee started making square pizza with his kids on a lark in the early pandemic and did so with his own sourdough starter (fed initially with kimchee juice), ultimately landing on a three-day cold-fermentation process for the dough. The result is fluffy and tangy in all the best ways, and that’s combined with the crispy-edged perfection of the Detroit style and a menu of untraditional toppings. The plain cheese and pepperoni pies are both elevated with circles of ricotta cream dotted across them, and the Bulldog — a delicious mashup of Korean flavors and a Japanese okonomiyaki pancake, with bulgogi beef, kewpie mayo, kimchee, and bonito flakes — is a brilliant twist on the form. The pizzas travel pretty well via delivery apps — they could always use a refresh in a 450 oven — but having one in-house, oven-fresh at the flagship location on 9th Street, with a cold beer to wash it down, is the recommended way to go.
59 9th Street, and the slice shop is at 553 Divisadero – Order here

Debuting just before the pandemic, this expansion of local brewery Cellarmaker’s operation became a staple of comfort food for the Mission/Bernal area during the darkest days. Like at Sunset Squares, the pizzas come with great beers if you’re dining in-house — and they have cans to go — and these smaller square pies are also extraordinarily pillowy and light, despite their appearance. The menu keeps things simple with a Detroit-style red-top pie; a “Supremo” with pepperoni, sausage, mushrooms, Jimmy Nardello peppers, olives, onion and house-made tomato sauce on top; as well as a market veggie pie, a classic pepperoni pie, and a green-top pie, using pesto in place of red sauce. These square pies are also individual-sized — not the traditional 10×14 but 8×8 — enough for two only if neither of you is too hungry, and not nearly as filling on a per-piece basis as any of the others on this list, which is nice too.
3193 Mission Street – Order for pickup here

Another Detroit-style pizza business that debuted just before the pandemic and capitalized on everyone’s comfort-food cravings, Square Pie Guys already boasts three locations, including a new flagship location at Ghirardelli Square. The pizza here is excellently crusted and creatively topped, and the dough still provides a spongey lightness amid all that fried cheese goodness — though still a bit heavier than the entries above, and what arrives by delivery is not always as divine as what you get in-house. Square Pie Guys has some unique combos and excellent, restaurant-worthy salads going for it, though — a recent summer salad with charred and shaved asparagus, frisee, and feta was especially good. And in addition to offering sauce options not found elsewhere — vodka sauce or green goddess, anyone? — they’re also using their dough for dessert, in the form of sweetly glazed monkey bread topped with seasonal fruit, and with ricotta for dipping.
845 Beach Street and 1077 Mission Street, SF; 499 9th Street in Oakland – Order here or via DoorDash/Caviar

Tony Gemignani’s ode to Chicago-style pizza, North Beach’s Capo’s, added Detroit-style pies as a menu option for most of its existing offerings back in 2020 — Tony’s Pizza Napoletana, around the corner and up the street, has had a Detroit section on its comprehensive pizza menu for over a decade. While the Detroit and Chicago styles share some similarities, the examples above on this list do their best to keep the dough from succumbing to the heaviness of most Sicilian and Chicago pizzas. Not so much here — the dough appears to be the same for both styles. Don’t get me wrong, Capo’s Detroit pizzas are legit and the salty fried-cheese edges and bottom crust are pretty perfect — and decadent. But the style feels like an afterthought on this menu, and one recent delivery order I had was so light on actual toppings that were not tomato sauce to be laughable — amid some scant bits of Italian sausage and a thin layer of provolone, the pizza was doused in an unnecessarily thick layer of tomato sauce, two thirds of which had to be scraped for the pizza to be enjoyable. But if you love tomato sauce above all else, this might the best in your book.
641 Vallejo Street – Order here

Joyride Pizza debuted last year in the Mission District, and quickly expanded with a Yerba Buena location and, more recently, with a pizza pop-up inside Woods Beer & Wine Co.’s Lower Haight brewpub. The pizzas are solid examples of the Detroit style and boast very crisp edges and bottoms, but I also find their pizzas excessively salty — likely a combination of toppings, dough, cheese, and sauce that adds up to just too much sodium bite. And the quality of the toppings and combo choices here pale in comparison to those above — bland canned black olives don’t really cut it in this town, IMO, and the pepperoni might be the saltiest I’ve tried. Still makes for a great drinking snack, and will certainly get you to order more beer.
411 Valencia Street, 730 Howard Street, and 530 Haight Street – Order here

They can boast being the “first” in town to specialize in Detroit-style pies, but Pizza Squared is more accurately a specialist in Sicilian pizza with a side business making Detroit-esque, cheese-crusted pies. And doubling as a slice shop, the SoMa location is just as liable to give you a fresh, crispy, piping hot slice as a soggy, insufficiently warmed-through one. There can also be a heavy hand with the cheese here, weighing down these already weighty slices, and some of the combos are a bit of a stretch — there’s a Mexican pizza that’s topped like nachos with seasoned ground beef, refried beans, mozzarella, Mexican four-cheese blend, bell peppers, scallions, and lime crema.
885 Brannan Street – Order here

I hate to ding Little Star, which makes great, cornmeal-crusted, Chicago-style pizza, for what seems like a bandwagon-y experiment that’s being offered only on their delivery menu. But you can currently order several Detroit-style pizzas from Little Star’s Valencia location for a $10 promotional/preview price on Caviar/DoorDash — ostensibly while the kitchen figures out how to make these work. They don’t not work, and the crust — which seems suspiciously similar to the other deep-dish pizzas they make — is still delicious, with some lightly crispy, lightly cheese top edges. But sort of like Capo’s, you can’t just invert the sauce and cheese up the dough and call it Detroit, since the finest examples are more akin to airy focaccia than to Sicilian or Chicago pizza. Maybe this will improve if they decide to add it as a permanent menu option! Thus, they’re not being formally ranked here.
400 Valencia Street at 15th Street – Order here