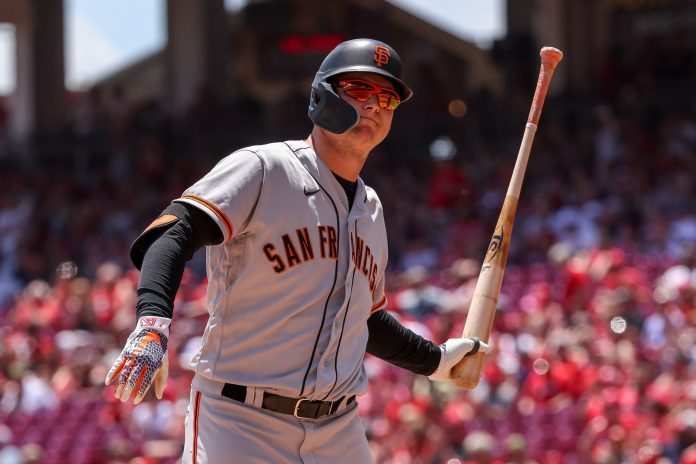 “This will go down as one of the most memorable sports stories of 2022,” said Sports Illustrated of an incident that sounds like it should be an April Fools’ headline.

On Friday, the Cincinnati Reds’ Tommy Pham was suspended for three games — or the entirety of the Giants/Reds’ weekend series, which Cincinnati won 2 games to 1 — for slapping the San Francisco Giants’ Joc Pederson in the face.

The reason? Fantasy football, and some trash talking (or GIF sharing) by Pederson about Pham’s former team.

“I slapped Joc,” Pham said in an interview with reporters. “There was some shit that went on in fantasy, but what he forgot to tell you guys, he said some disrespectful shit in a text message and I called him out on it. It was regarding my former team. I had to address it.”

The internet seemed poised to lose its mind over the incident, but the timing was a bit off to go viral. “Those of us in the content business love outrageous stories,” wrote Sports Illustrated’s Jimmy Traina. “The more outrageous, the better. Reds outfielder Tommy Pham slapping the Giants’ Joc Pederson during batting practice over a fantasy football beef is as outrageous as it gets.”

“There were only two problems: 1) We don’t condone violence, and 2) That story happened at the start of a long holiday weekend and we couldn’t capitalize on maximum traffic,” Traina continued. “Despite those two issues, this will still go down as one of the most memorable sports stories of 2022.”

Joc Pederson, shortly after striking out in the sixth inning against the Cincinnati Reds on Sunday (and a few days after he’d been disciplined for a perceived breach in code about Fantasy Football and sharing group-text jokes about player’s former teams). The Giants went on to win Sunday’s game 6-4. (Photo by Dylan Buell/Getty Images)

The fantasy football beef had something to do with a decision Pederson made to put one of his players on injured reserve, and a more general dispute over the rules. (Does it feel as silly to read those words as it did to write them?) Regarding those rules, Pham used a refrain heard a few times in this year’s NBA playoffs: “There’s a code. You fuckin’ with my money, then you gonna say some disrespectful shit? You know, there’s a code to this.”

The New York Mets had some fun with the real-life fantasy fight:

Regarding that disrespectful shit about Pham’s former team: that was over a GIF that Pederson shared in the fantasy league’s group text.

“It is true: I did send a GIF making fun of the Padres,” Pederson told reporters, adding that he was close with several members of that San Diego team, and that he was poking fun of the fact that such a talented squad wasn’t going to make the playoffs.

In the group text, Pham said to Pederson, “Joc, I don’t know you well enough to make any jokes like this.”

To reporters this weekend, Pederson said, “If I hurt anyone’s feelings I apologize for that.”

Joc shares details of what happened in his fantasy football league that started his altercation with Tommy Pham today pic.twitter.com/d9NBTwPVoG

Facebook
Twitter
Pinterest
WhatsApp
Previous articleLooser Rules for To-Go Cocktails Pass State Senate, Food Requirement Might Be Nixed
Next articleWhy Is This Prop A Ballot Measure Asking for Another $400 Million for Muni? An Explainer