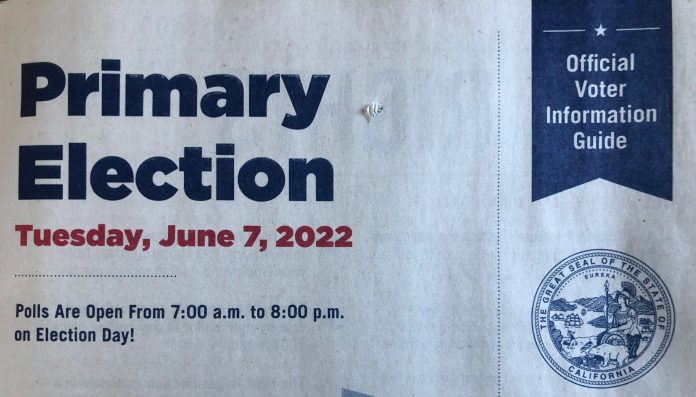 Your mail-in ballots will start arriving next week (!) and voter guides are already in the mail as yet another election looms, with primary elections for Gavin Newsom, Nancy Pelosi and Alex Padilla, plus eight SF ballot measures, including a DA recall you may have heard about.

Wait, yet another voter guide is now hitting mailboxes? (Yes, SFist received the one seen above today). And early voting starts in just five days, on Monday, May 9? Didn’t we just do this barely two weeks ago? We did, and welcome to the election-palooza that is the year 2022 in San Francisco, complete with recalls, and an attempt to recall the recall process.

It’s that time California. Let’s exercise those rights, do the research, and make sure we vote in the primaries.
💪🏻 June 7 ✅ pic.twitter.com/5RApmZwFKP

All the big statewide offices have a primary election that day (governor, senator, etc.) plus U.S. Congress and state Assembly seats. That means Gavin Newsom, Nancy Pelosi, and Alex Padilla are all up for primaries, in a top-two primary election that will determine which lamb they will go on to slaughter in the November 8 general election. (Senator Dianne Feinstein, regrettably, does not face an election this year.)

In the state Assembly, freshly elected Matt Haney will essentially run unopposed, though his vanquished April 19 rival David Campos’ name will still appear on the ballot, as will the name of a little-known Republican. Over in the city’s other Assembly district, AD-19, Phil Ting also faces a Republican with little name recognition who might only get a few votes from the Lake Merced area. SF City Attorney David Chiu is also basically unopposed. With respect, the outcomes here seem very predictable.

San Francisco voters will decide on eight ballot measures when they vote in the June 7 election, including the marquee initiative to recall District Attorney Chesa Boudin.

Here's a full rundown of what’s on the ballot: https://t.co/CySozpTuvA

But lordy, have we got barnburner June 7 ballot measures here in San Francisco. The Chronicle reports on the eight local June 7 ballot measures, many of which are divisive enough that we will likely exceed the low turnout affairs we had in February and April special elections this year. Most of these measures are related to the highly charged issues of recalls, and Mohammed Nuru/Recology scandal fallout.

I cannot for the life of me figure out why tech companies like Lyft, DoorDash, and Salesforce are putting tens of thousands of dollars into Prop A, a Muni Reliability and Street Safety Bond measure. Are they just being good citizens now? Is there some profit motive here? I’ll go with the latter! Prop A is a standard sounding Muni upgrade and street redesign bond measure, but being a bond measure, it needs a two-thirds majority to pass.

This is your second Mohammed Nuru and DBI scandal reform measure (last November we voted for a new public works commission), which was introduced by a gaggle of supervisors, according to the Examiner. If passed, the Examiner explains that “seats on the [Department of Building Inspection] commission designated for specific industries or stakeholder groups would be eliminated. Additionally, a nomination and confirmation process for all nominees would be required as part of the appointment process.”

Here’s an attempt to recall the recall process in San Francisco, or at least tighten it up so we don’t have as much recall-mania. Recall petition campaigns would have to wait until the official were in office for a full year (as opposed to the current six months), and you could not hold a recall election within a year of the next scheduled election for that office-holder’s position. Further, if an official is recalled, the mayor’s replacement would not be allowed to run for that office in its next scheduled election.

Another City Hall office would be created by this ballot measure from Supervisor Catherine Stefani, which per the Chronicle, would “create a new city office pulling together a range of victims’ services currently spread across multiple departments,” which would act as a “a one-stop shop outside of law enforcement where survivors can go to navigate a currently complicated system.” It would also initiate a pilot program that hopes to provide free legal counsel to domestic violence victims.

This is another ethics measure in the wake of payment solicitation scandals at City Hall, ahem Nuru. City officials would be banned from seeking donations from contractors who have business before City Hall, even if the official claimed the donation was for something innocuous-sounding like the Lefty O’Doul’s Foundation for Kids.

Recology’s monopoly on waste collection in San Francisco would still remain intact if this local Recology oversight measure were to pass. But there would be more oversight of any future Recology rate hikes, which would have to be approved by the city controller rather than the head of Public Works. Additionally, a Refuse Rate Board would have more powers to regulate rate increases.

Under this paid-leave measure, companies with more than 100 employees would be required to provide up to 80 hours of paid time off. That sounds kind of pandemic-specific, and may not have broader implications once (if?) we ever get finished with COVID-19. But the Chronicle adds that “Members of vulnerable populations who can’t work outside during air quality emergencies — such as an extreme amount of wildfire smoke — would also be eligible.”

Last but certainly not least controversial, your recall vote on District Attorney Chesa Boudin now has the official ballot name Prop H. You’ve seen plenty of coverage on the topic, and the eyes of CNN, Fox News, and the whole national media apparatus will be following this one closely when the polls close at 8 p.m. PT the night of June 7.

Again, you can vote starting Monday at City Hall, as early voting begins May 9.