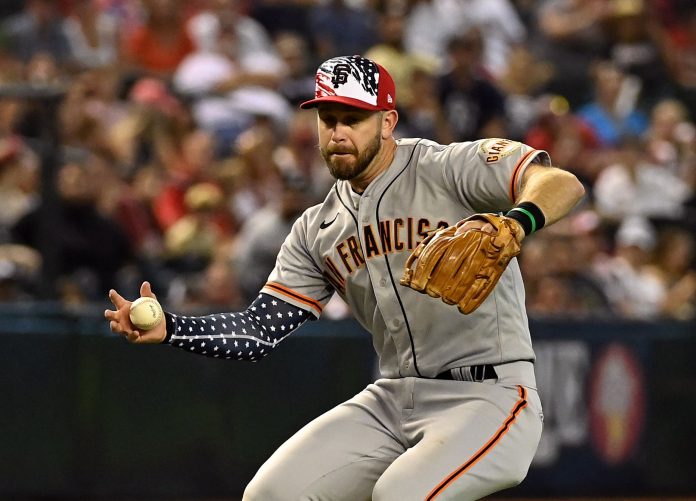 The San Francisco Giants Are Going Through a Rough Patch. What’s the Cure?

“Blahs ongoing for Giants in 8-3 loss at Arizona,” writes the Chronicle of yesterday’s Fourth of July game against the Arizona Diamondbacks, where former Giant Madison Bumgarner and Carlos Rodón “essentially mirrored each other through five innings Monday.”

“That left the difference up to the defense, and this season, that’s not a good thing for the Giants,” the Chronicle says.

So what’s going on? I wish I could tell you, but I’m no kind of baseball analyst. More than that, I believe in the “win some, lose some” philosophy of sports. Every team has its ups and downs and rough patches. But it will certainly be telling how the Giants react, and how whether they can pull themselves up by their orange-colored bootstraps.

Regarding the aforementioned unspectacular defense, Giants Manager Gabe Kapler told the Chronicle that the team has some “limitations.” Deadspin said the Giants have been playing defense “like they’re playing in Strawberry Fields instead of Oracle Park. The Giants are tied for the worst defense in the league in Outs Above Average, with a -31, according to StatCast. In Runs Prevented, they are dead-ass last by themselves.”

Adding insult to the injury of the Giants’ current rough patch, catcher Curt Casali left yesterday’s game with a left with a right oblique strain. “Casali will get an MRI exam Tuesday, but obliques almost always require stays on the injured list, particularly for hitters,” the San Francisco Chronicle wrote. (Photo by Norm Hall/Getty Images)

“Even when [Brandon] Crawford returns, they’re ridiculously old on the left side of the infield with Evan Longoria, and there doesn’t seem to be a natural center fielder to be found anywhere,” Deadspin continued. “And as we know, Oracle Park’s greeneries are roomy indeed. If the Giants are going to get into the playoffs, they’re going to have to find a way to stop turning into a fish-slapping dance in the field.”

Kapler made a very Bay Area-like observation, saying his team needs to “improve their energy.” (No word on any chakra realignment as of this writing.) “I think from our veteran players, to our young players, to our coaching staff, we’re all looking to turn the corner and making that energy shift,” Kapler told the Chronicle of the team-wide vibe. “This not something that you flip a switch when you want the energy to move in a different direction.”

Giants’ manager Gabe Kapler is trying to whether a mid-season storm and a systemically poor defense, and to fundamentally shift his team’s energy out of its current funk. (Photo by Norm Hall/Getty Images)

Kapler also seemed to invoke the philosophy of stoicism, saying he doesn’t want players focusing on things they can’t control. “Say, umpire calls,” the Chronicle wrote. “But he used that just as an example, not as a specific issue the team has had.”

“I think something needs to change,” Giants’ pitcher Carlos Rodón told the Chronicle. “I think we’re playing really bad baseball. We can say that as much as we want, you know? Until we physically do something and make a change, I don’t think we’re going to see any results. We need to play with a little more fire.”